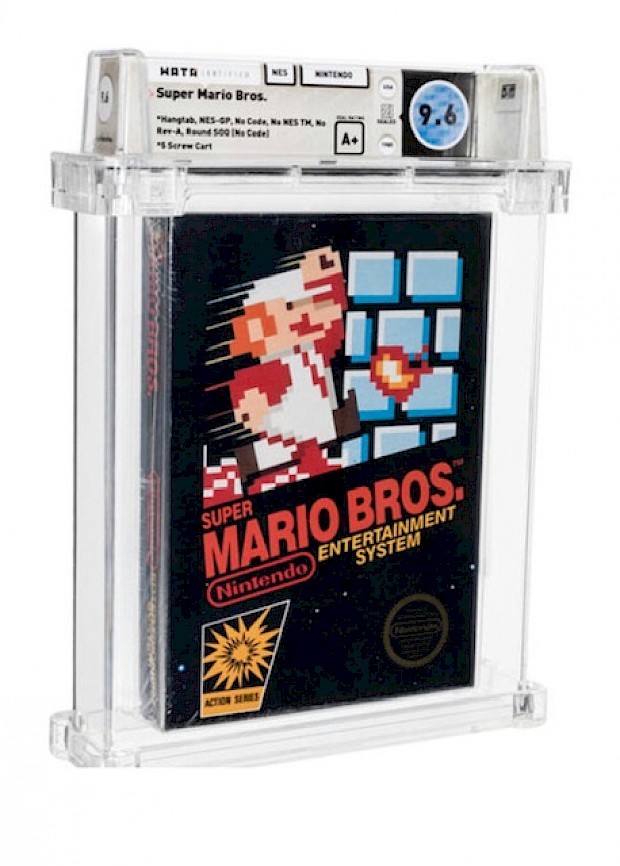 From the iconic video game franchise, Mario is one of the most recognizable characters in the world. Ironically, the little plumber was never intended to be a protagonist. He was a placeholder, a stand-in for the actual main character during beta-testing for the first iteration of what would eventually become the Mario series. But focus groups and beta testers loved Mario. Everyone did. It’s hard to nail down what makes Mario such a great character, but the fact that he is great is undeniable.

It should be unsurprising, then, that many of the games that have set record sale prices have been part of the Mario franchise. In July of 2019, an unopened copy of Super Mario Bros. for the Nintendo Entertainment System (NES) set the record for the most expensive video game ever sold for $114,000. Super Mario Bros. for the NES was originally sold in 1985 for $25, roughly $60 today. Quite a markup!

There were several features that contributed to the high price tag, including a small piece of cardboard called a hangtag that, as you can probably infer from the name, hung from the back of the game. Due to changes in manufacturing methods, this hangtag allowed the game to be dated with an unusual degree of specificity. The buyer, who remains undisclosed, hinted that the game might just return for auction at a later date.

Last November, another unopened copy of Super Mario Bros. sold for $156,000. Then, on April 2nd, another copy of Super Mario Bros. went up for auction. This time, the game sold for $660,000 -- an increase of half a million dollars and five times the last sale price. This would make this particular copy the record holder for most expensive video game twice over. Its seller remained anonymous, but it’s fun to think that this might be the same copy that sold back in 2019. However, we can say for sure that the copy sold recently is not the one that went up for auction in 2019, as it had a back story stating that it was bought in 1986 as a Christmas gift and has spent the last 35 years forgotten in a desk drawer. Discovered earlier this year, it is the most pristine copy in existence… that we know of yet. Makes you want to go rifling through your old desk drawers, right? For all anyone knows, there could be another copy packed away in an attic, just waiting to be discovered.

What makes this particular game so special? Part of it is the hangtag mentioned earlier, and the manufacturing changes that were occurring at the time. The game was released nationwide in mid-to-late 1986, in black boxes. At the beginning of 1987, Nintendo added the NES trademark symbol to the boxes. This means there are very few of the original run, produced for a scant few months in 1986. The lack of that mark makes this copy provably from the short, early run. That isn’t all, though. An even shorter production run saw boxes without the mark packaged in plastic shrink wrap, rather than with a sticker seal. Heritage Auctions Video Games Director Valarie McLeckie compares the odds of there being another copy in such condition, and from the same run, as being, “akin to looking for a single drop of water in an ocean.”

The game was sold at the Comics & Comic Art Signature Auction, which saw several other mint condition classics go for almost unbelievably high prices, although none came close to $660,000. Mega Man for the NES sold for $144,000, a price that would have netted it the record just a year ago. Mike Tyson’s Punch-Out!! for the NES also saw a heavy jump in price. A copy was sold in 2019 at the same auction as the previous record-holding Super Mario Bros., going for $50,400. Now, however, the price has more than doubled, hitting $102,000. With prices increasing so dramatically and so quickly, it wouldn’t be a shock to see the record hit seven figures by the end of the year. We’ll be keeping an eye on developments in video game sales… and looking through our own desk drawers. Just in case.