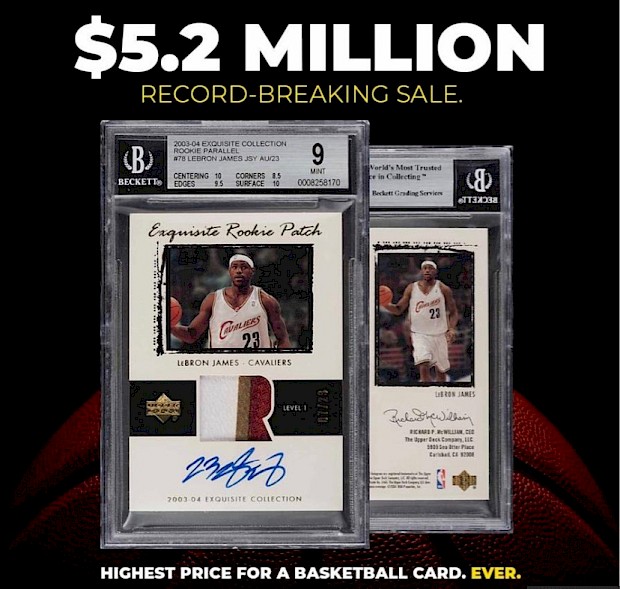 This past February, a one-of-a-kind 2018-19 Panini National Treasures Luka Dončić autographed card sold for $4.6 million, setting the record for the most expensive basketball card ever sold. Now, a scant two months later, that record has been well and truly shattered.

A signed 2003-04 Exquisite Collection LeBron James Rookie Patch Autograph Parallel card has sold for $5.2 million, soaring past the previous record -- and, in fact, tying it for the most expensive sports trading card of all time. It shares the crown with a 1952 Topps Mickey Mantle rookie sold in January that is the third-best example of the card in existence. Beckett Grading Services (BGS) graded the LeBron card as an overall Mint 9, with subgrades of 10 for centering and surface, 9.5 for edges, and 8.5 for corners. Only 23 copies of the card were ever printed, the unusual serial number being a nod to LeBron’s jersey number.

“This was actually in the works for a while,” PWCC’s director of business development Jesse Craig told Darren Rovell of The Action Network. “The demand for rare cards, especially basketball right now, is just like the demand for fine art.” PWCC did not disclose the identity of the buyer. This is unsurprising, as the amount of attention being generated by record card sales remains on the rise, and many collectors prefer to keep the exact contents of their collections private.

A similar LeBron rookie card, of which only 99 were printed, was sold on April 24th by Goldin Auctions for $1.72 million. While not as high as the new record-setter, on its own it is certainly nothing to sneeze at! This LeBron rookie was graded by BGS as a Gem Mint 9.5 overall, and the auction it was sold at brought in a total of $13.4 million that weekend alone. Other notable sales at the auction included the highest price ever paid for a Wilt Chamberlain card, which sold for $461,250, and a record high for a Tim Duncan card, which sold for $223,860.

“LeBron James is one of the greatest of all time, so it’s no surprise that his cards continue to smash records,” said Ken Goldin, founder of the auction site. It’s not just LeBron: high-end cards of all varieties are breaking records at an astonishing rate, and despite a recent decline in overall card sales, top-end pieces are expected to continue doing so. In fact, 23 of the 24 most expensive cards of all time have been sold since February of 2020.