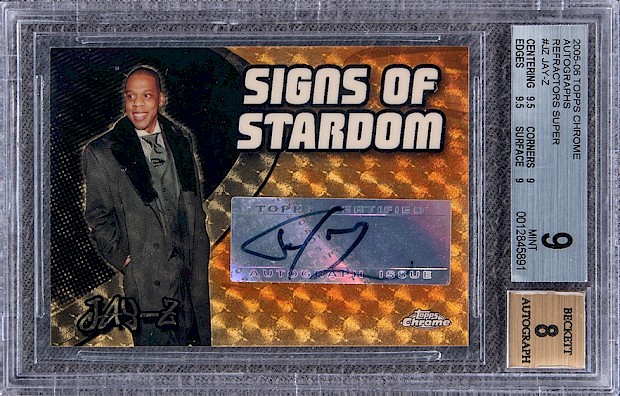 By now, just about everyone has heard about the boom happening in the sports trading card industry, but the card-collecting fervor hasn’t kept itself just to sports cards or card games. Setting a new record for the most expensive music card ever, as well as clearly establishing a growing trend, a Beckett Grading Services (BGS) Mint 9 2005-06 Topps Chrome Jay-Z Signs of Stardom 1/1 autographed card has sold for $105,780. The card is a one-of-a-kind piece of culture, with a numeric grade of 9 designating its mint condition.

Jay-Z himself is of course a cross cultural Hip-hop icon, and one of the most successful and influential artists in the industry, having been a rap mogul and producer for three decades now. The card was sold through Goldin Auctions, which lately has been making a name for itself as a premier auction house for card sales. They have hosted auctions for many other high-end cards, from LeBron James 1/1s to a $370,000 Pokémon card. The starting bid for the card was listed at just $500, and the bidding initially began to stall around $2,000. Once the auction house made an Instagram post advertising the auction, however, it seemed that they caught the attention of some savvy bidders. After just 49 bids, the card had reached six figures. “Signs of Stardom,” the card reads -- an appropriate caption. If evidence were ever needed of Jay-Z’s status as a cultural icon, this sale would be the proof of it.

The hobby of card collecting is clearly expanding beyond just sports cards or game cards like Magic the Gathering or Pokémon. As it continues to venture towards pop culture, the hobby will also continue to make itself more mainstream, and the same growth in high end sports cards is expected and anticipated in other types of cards. This variety and diversity in the market is sure to draw in new collectors and investors, feeding a cycle of excitement that will keep the card industry alive and well for long into the foreseeable future.